In each U.S. state, the Bishops have established Catholic Conference exists to coordinate faith-based advocacy at the state level. The conferences are not partisan organizations that endorse candidates, but issue-oriented groups that testify to our Catholic values in the public policy arena. This year has witnessed an important effort by the NJ Catholic Conference to support a minimum wage increase in the Garden State and the California Catholic Conference backing legislation extending overtime protections to farmworkers. 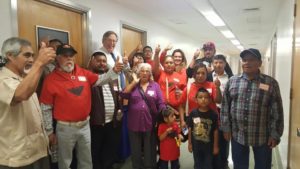 The Fair Labor Standards Act requires employers to pay premium wages for work beyond 40 hours per week – but many people don’t realize that the Act excludes some categories of workers, including agricultural workers. In California, the AFL-CIO and the California Catholic Conference have backed a determined effort to change that. It met with success this September when erstwhile Jesuit seminarian Governor Jerry Brown signed legislation making farmworkers eligible for overtime pay.

Meanwhile, in the Garden State, the New Jersey Catholic Conference joined with the NJ AFL-CIO and several state labor unions to bring the fight for $15 to the floor of the NJ State Legislature in Trenton. “We must always remember Pope Francis’ wisdom on the importance of the worker as he reminds us that labor is “not a mere commodity,” but has “its own inherent dignity and worth,” said Bishop Sullivan of Camden. NJ Catholic Conference representative James King brought the message to Trenton, testifying

On behalf of the Catholic Bishops of New Jersey, I ask the Senate Labor Committee to release Senate Bill 15 favorably. S15 would incrementally increase New Jersey’s minimum wage from $8.38 per hour to $15.00 per hour over four years while maintaining an annual increase based on the Cost of Living Index. Catholic Social Teaching supports workers’ rights for a just wage…. We realize that increasing the minimum wage will not eliminate poverty. However, Senate Bill 15 would  be an important step towards helping the working poor and providing the opportunity for them to enjoy a greater sense of self -worth and dignity.

Sadly, the bill was vetoed by Governor Chris Christie. Backers promise that the issue will return in 2017.