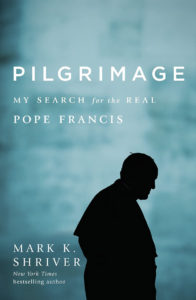 Mark Shriver, inspired by Pope Francis’ life and ministry, traveled to Argentina and retraced the footsteps of our surprising Pontiff – and writes of his journey in a new book, Pilgrimage: My Search for the Real Pope Francis. As Mark Zimmermann reports in the Catholic Standard,

The future pope, who encouraged his seminarians and priests to have “muddy shoes” in their service to their people, especially the poor, did just that, catching the bus, even on his vacation days, to visit the priests and people at the parish in the slums, joining processions and taking part in Masses held outside train stations and under a tent in a city plaza, bringing to life what some call a “theology of the people.”

Shriver also meets a man named Sergio Sanchez, the leader of a Buenos Aires cooperative of thousands of workers who make their living by picking up cardboard and plastic bottles for recycling. He said Cardinal Bergoglio first got to know the workers by baptizing their children and later supported them in their organizing efforts. Sanchez sat in a seat of honor at Pope Francis’s inaugural Mass and has attended Vatican conferences on ending poverty.

John Carr of Georgetown’s Initiative on Catholic Social Thought and Public Life will host Mark Shriver for a book talk Monday, Dec. 5. If you would like to attend, click here to RSVP.