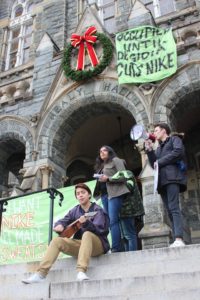 The Washington Post reports that Georgetown student activists ended a two-day sit-in on December 12, with the university committing to end Nike’s licensing agreement if the apparel maker does not secure access for an independent labor monitor throughout its supply chains. The sporting goods supplier produces athletic gear bearing the Georgetown logo, but actual production of shoes and tees is subcontracted to facilities in the global South – and Nike is on the hot seat over labor practices at a now-notorious production facility in Vietnam.

Georgetown was a founding member of the Worker Rights Consortium (WRC), an alliance of universities, student organizations and labor rights activists formed to stamp out sweatshop production of college-logo gear. Today nearly 200 colleges are affiliated with the WRC, including leading Catholic universities (see What is the Worker Rights Consortium?). WRC monitors visit facilities across Asia and Latin America to report on labor conditions and give workers an independent venue to pursue complaints and grievances.

In the wake of the horrible Rana Plaza disaster in Bangladesh, Pope Francis has urged greater attention to working conditions in the global garment industry, and many Catholics have taken up the call by asking hard questions about how their clothes are made. The WRC is an admirable attempt to put this moral imperative into practice – but Nike has spent 2016 defying the WRC system in defense of a dubious supplier. Dire reports of unsafe, unhealthy and abusive labor conditions at the Korean-owned Hansae production complex in Vietnam have circulated for years, but the crisis has come to a head because Hansae is denying WRC monitors access to the facility.

Nike’s license to produce Georgetown gear expires December 31. It’s a unique opportunity to bring the company into compliance – or make Nike CEO Mark Parker explain to shareholders why shielding an abusive employer was important enough to forfeit the lucrative Hoya contract. The students’ action, and the university’s decision, is a timely affirmation of our faith in the midst of the Christmas season. It tells the world that our faith comes first – even when doing justice carries an economic price.

The Working Catholic: Silence What is the Worker Rights Consortium?
Scroll to top