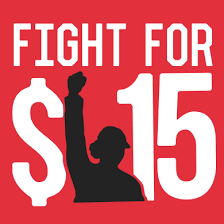 The National Employment Law Project (NELP) held its annual Raise the Wage conference in Washington D.C. this past week. Attendees were a mix of labor leaders—traditional unions and Fight for $15; organizers from worker centers; economists; labor lawyers; staffers from labor rights champions; and advocates from faith-based organizations and the faith community, including NETWORK and the Jesuit Conference.

There was some great news shared at the conference: since Fight for $15 was launched in 2012, low-wage workers have won $61.5 BILLION in annual raises! However, the new administration and the 115th Congress aren’t exactly friendly to labor, and advocates are expecting legislation that could be very harmful to working families, including a national Right to Work law and repealing aspects of the National Labor Relations Act.

One pillar of our Catholic Social Teaching is the dignity of work and workers. From Rerum Novarum to Economic Justice for All to nearly daily reminders from Pope Francis, we hear, “All people have the right to economic initiative, to productive work, to just wages and benefits, to decent working conditions, as well as to organize and join unions or other associations.” Now more than ever, Catholics must stand in solidarity with those who are not making a living wage and say “no to an economy of exclusion.”

As people of faith, we have a special place in this new fight for economic justice. It is our Baptismal call to lift up the moral imperative that no one should have to work full-time and raise their children in poverty.

Union rights targeted in NH, MO, KY, IA: How will Catholics Respond? Kentucky Parish Priest: Be Proud to Be Union Where You Worship, Too
Scroll to top