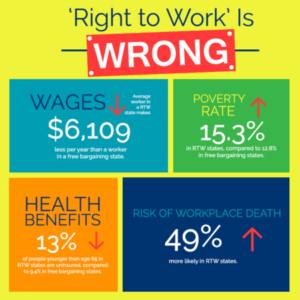 The next few months promise to be challenging ones for unions, and workers who value their union rights. In New Hampshire, Missouri, and Kentucky, newly elected politicians have promised to go after organized labor by passing so-called “right to work” legislation. Indeed, many observers expect national right-to-work proposals to come up for debate in the US Congress (libertarian-minded Kentucky Senator Rand Paul filed such a bill in the last session). In Iowa and Missouri measures targeting the bargaining rights of public employees are being floated. How will Catholics respond to these initiatives? How should they, given the premises of Catholic social teaching?

Public employees and the Right to Organize

This one is pretty straightforward: Catholic social teaching, from the time of Rerum Novarum to the present, has consistently defended the right of workers to organize in unions. As Gaudium et Spes observes, “Among the basic rights of the human person is to be numbered the right of freely founding unions for working people.” There’s no exclusion for public employees. (Lest we forget, Pope John Paul II’s favorite labor union was a bargaining unit of public employees that illegally struck a Gdansk shipyard!)

If any of the proposals strip public employees of their union rights, Catholics could do worse than following the lead of the Wisconsin Catholic Conference. In 2011, Governor Scott Walker and his supporters in the legislature cited budget shortfalls to justify denying state and local public workers their right to organize and bargain collectively. Writing for the WCC, Milwaukee Archbishop Jerome Listecki observed that all parties, including workers, might be called upon to sacrifice for the common good – but stated emphatically that “hard times do not nullify the moral obligation each of us has to respect the legitimate rights of workers.” The USCCB Committee on Domestic Justice and Human Development seconded the Archbishop’s message soon thereafter. Sadly, few legislators listened, and these workers lost this “basic right.”

A growing number of states have created a loophole, though, called “right to work.” Right to work allows individual workers to opt out of paying dues, even where a majority voted for union representation. The results are what you might expect. Since everyone gets union wages and benefits, whether they pay dues or not, a lot of workers decide to become “free riders.” They end up sitting in the wagon while their co-workers push. Those pushing the cart resent the free riders, and if enough workers climb into the wagon it grinds to a halt.

Catholic social teaching does not have a teaching on “right to work” per se. The Church is a global institution, spanning nations with a wide variety of industrial relations systems. The Church does not prescribe the forms of collective bargaining laws; It does, however, give us some criteria to evaluate them. Chicago Cardinal Blase Cupich has cogently observed:

In view of present day attempts to enact so-called right-to-work laws the Church is duty bound to challenge such efforts by raising questions based on longstanding principles. We have to ask, “Do these measures undermine the capacity of unions to organize, to represent workers and to negotiate contracts? Do such laws protect the weak and vulnerable? Do they promote the dignity of work and the rights of workers? Do they promote a more just society and a more fair economy? Do they advance the common good?”

Right to work laws do not forbid workers from organizing and bargaining collectively, but they burden the exercise of those rights significantly. It seems difficult to reconcile these new “right-to-work” proposals with either Pope Leo’s wish in Rerum Novarum that unions “become more numerous and more efficient” – or with Pope Benedict’s instruction in Caritas in Veritate that with the onset of globalization, Leo’s call for “the promotion of workers’ associations that can defend their rights must be honoured today even more than in the past.”