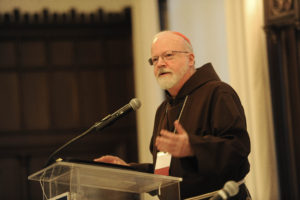 January witnessed an impressive gathering at the Catholic University of America, where labor and Church leaders came together for a dialogue on the Dignity of Work and the dangers of an “erroneous autonomy” – the libertarian, free-market vision that shatters solidarity and imagines “looking out for number one” as the summum bonum. San Diego Bishop Robert McElroy, writer and pundit Tom Frank, Boston Cardinal Sean O’Malley and AFL-CIO President Richard Trumka were among the many astute critics of economic inequality who addressed attendees. It’s safe to say that “Am I my brother’s keeper?” is NEVER the right answer when God asks you a question, whether he is asking you about the poor, the unemployed, or the refugee. For coverage of the event, check out:

Getting ready for Trump: Catholic leaders condemn the ‘imperialism’ of free markets (America)

Working Catholic: Stop Trafficking Kentucky Bishop on Right to Work: “This cannot be seen as contributing...
Scroll to top