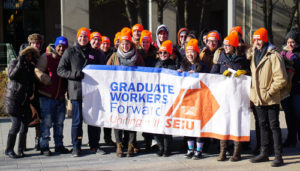 In recent years, American universities have cut instructional costs by shifting an ever-growing share of teaching duties from costly tenured faculty to part-time adjunct instructors and graduate students with low salaries and few (if any) employment benefits. In response, adjunct faculty at several universities, including Catholic ones, have formed unions. In January 2016 adjuncts at Loyola University Chicago voted by 2-1 to join SEIU 73; they are currently bargaining with the school for a first contract.

Meanwhile, at Columbia University in NYC, graduate teaching and research assistants seeking to join the UAW asked the National Labor Relations Board (NLRB) to recognize that they were also university employees with the right to organize. The NLRB ruled in their favor in August 2016, and other graduate assistants around the nation seek to follow suit.

In December graduate research and teaching assistants at Loyola University Chicago requested a union representation election so they could vote on whether to join SEIU 73 as well. The NLRB accepted their petition and will do a mail ballot starting January 24. Votes will be counted February 8. Stay tuned!