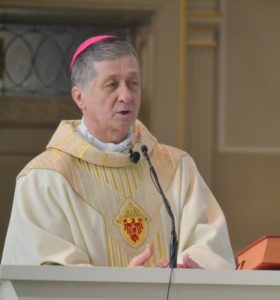 In April, Cardinal Blase Cupich delivered an important address at Loyola University Chicago, reflecting on the legacy of his famous predecessor Cardinal Joseph Bernardin. Bernardin had earned fame in some circles – and notoriety in others – for promoting the idea of a consistent ethic of life that bound together Catholic teaching on life issues such as abortion, euthanasia, war and the death penalty. By insisting on preserving the integrity of Catholic teaching against the tides of political division, Bernardin called on us to make sure our faith identity, not our partisan attachments, came first in our lives. Cardinal Cupich, reflecting on the signs of the times, told his listeners:

I am convinced that just as Cardinal Bernardin proposed that an ethic of life be consistently applied to unite all life issues, we need in our day to mine the church’s social teaching on solidarity… an ethic of solidarity, consistently applied to the full range of issues that impact our human living, has the potential of reshaping the debate at a time the nation and the world are deeply divided, and vulnerable to influences that only deepen the fears at the heart of that division.

A “consistent ethic of solidarity” linking our concern with the unborn, the immigrant, and the displaced worker holds great promise as a form of Christian witness in our polarized political climate. Cardinal Cupich’s address was published in Commonweal in May; our friend Michael Sean Winters offered a thoughtful commentary in his Distinctly Catholic blog at the National Catholic Reporter.