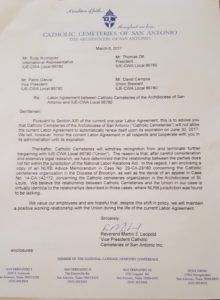 In an unfortunate setback for worker justice at Catholic institutions, Catholic Cemeteries of San Antonio has moved to strip cemetery workers of their union rights. The cemetery workers had been represented by the CWA for more than a decade when the union received a letter from the Catholic Cemeteries administrator Fr. Martin Leopold stating that they would no longer recognize the union after the current contract expired June 30.

Fr. Leopold’s letter made no attempt to reconcile the action with Catholic social teaching. It did, however, advise the employees they had no legal recourse, arguing that the First Amendment puts Catholic Cemeteries beyond the reach of U.S. law. The union is pursuing an appeal before the National Labor Relations Board.