Writers often lament the loss of “good” American industrial jobs to trade and automation, and it’s true that the decline of US manufacturing has denied many Americans an opportunity to earn family-supporting wages and benefits. But those jobs didn’t start out “good jobs” – they became good jobs when workers organized, bargained and struck to make them good. Now airline catering workers are campaigning to do the same with a neglected segment of the air transportation industry, and the Catholic Labor Network is accompanying them in their struggle. 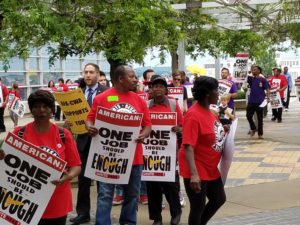 While the major US airlines earn billions of dollars in profits annually, the workers who pack the meals for flights endure low wages and unaffordable family health insurance. They have organized from coast to coast in unions, primarily UNITE HERE and the Teamsters, and are preparing to strike if necessary. For now they are engaged in a series of informational pickets to tell the public what’s going on.

On July 23, hundreds of airline catering workers from several East Coast states gathered at National Airport holding placards stating “ONE JOB SHOULD BE ENOUGH.” Tired of working for poverty wages and sometimes lacking health insurance for their spouses and children (two thirds of employees decline the insurance, which carries expensive employee premium payments),  they warned air travelers that they had taken a strike vote and they were ready to ground planes to get justice.

The following week at the Roundtable of Catholic Diocesan Social Action Directors, the Catholic Labor Network invited Dallas-Fort Worth airport food service worker Letitia Gomez to tell social concerns staff about her job and why she was standing up. Gomez, a single mother who had worked for airline food service contractor Sky Chef for more than twenty years, still earned a salary below the federal poverty line. A parishioner at St. Luke’s in Irving, TX, Gomez appealed to listeners for solidarity.

The food service workers are preparing for a major action August 13 at the Dallas-Fort Worth Airport, where many will court arrest in civil disobedience actions. The metro area is the headquarters of American Airlines. The workers want AA to know that even if they outsource catering jobs, they can’t outsource their responsibility to the workers who occupy them.