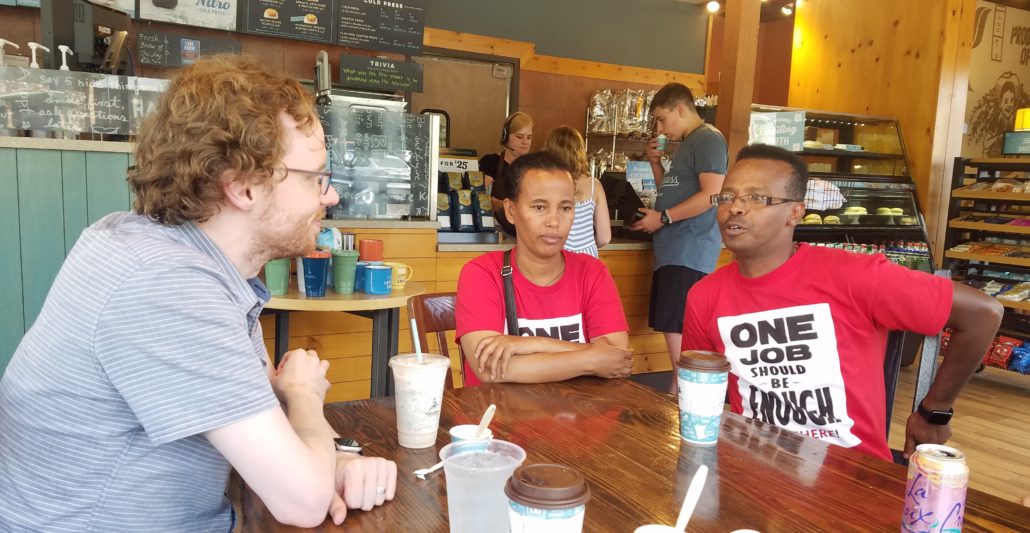 Readers of this newsletter know that airline food service workers are among the lowest-paid employees in the aviation sector, and that across the country they are organizing to change that. Recently airline catering workers in the Twin Cities shared their stories with CLN and with Adam Fitzpatrick, Social Mission Outreach Coordinator for the Archdiocese of Minneapolis and St. Paul.

America’s airline kitchens are largely staffed by immigrants. In Minneapolis and St. Paul, that usually means the person packing meals for food carts was born in East Africa. Adil Beker, Daremyalish Geda, and Hailu Mulugeta, who met with us, all hailed from Ethiopia. They are employed by LSG Sky Chefs, a contractor servicing Delta, American Airlines and other major carriers.

The starting wage at the Minneapolis Airport Sky Chefs is $13 per hour, about $26,000 per year for a full-time employee. Though above the minimum wage, it’s not nearly enough to pay rent and support a family in Minneapolis. But the workers were even more concerned about the poor health insurance offered by Sky Chefs: co-pays are $50 a visit for even in-network providers, and it costs $500 per month to buy the family coverage. Most workers instead have to turn to Medicaid or the public exchanges, where taxpayers subsidize the cost of their health care – or they just go without.

Many of the 20,000 airport food service workers have joined the hotel and restaurant workers’ union UNITE HERE. They point out that airlines such as Delta and American are highly profitable, and are calling for a starting wage of $15 per hour and better health care coverage. They have voted to strike, but under the law they can’t do it until they are “released” by the National Mediation Board.

“Worker justice is one of the most consistent elements of Catholic Social Teaching, emphasized since Rerum Novarum,” says Fitzpatrick. “We as Church need to show solidarity with workers organizing for justice.”

To learn more, and to support the workers in their fight for just wages, contact clayton@catholiclabor.org.