As a hot August began, leaders from the National Farm Workers’ Ministry gathered in Washington to explore ways to extend solidarity to the men and women who harvest our food. The NFWM is an interdenominational Christian organization that supports farmworker unions and alt-labor formations with prayer and action. Their work supports the United Farm Workers, the Farm Labor Organizing Committee, and the Coalition of Immokalee Workers, to name a few. 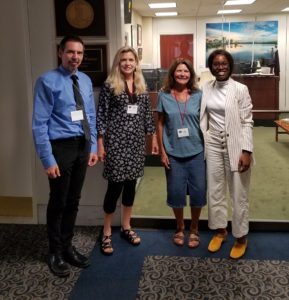 Hill visits in 2019 focused on two critical pieces of legislation. The Fairness for Farmworkers Act seeks to redress a historic wrong: when New Deal reformers passed the Fair Labor Standards Act (FLSA) of 1938, which establishes overtime wages and other protections, farmworkers were excluded from coverage. Fairness for Farmworkers would extend overtime and other standard labor protections to these workers, and currently has 14 co-sponsors. The Agricultural Worker Protection Act, which the UFW has made a special priority, would offer undocumented farmworkers the opportunity to obtain a “blue card” giving them legal work status – and eventually to earn a green card. The bill has 13 co-sponsors.

The Catholic Labor Network is exploring opportunities to expand our work with NFWM and the nation’s farm worker organizations.