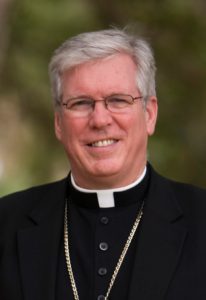 Each year on Labor Day, the Chairman of the US Conference of Catholic Bishops’ Committee on Domestic Justice and Human Development issues a statement reflecting on our economy in light of Catholic Social Teaching. This year Chairman Bishop Dewane (Diocese of Venice) looked back on a landmark statement issued by America’s bishops a century ago. In a document that came to be called the “Bishops’ Program for Social Reconstruction,” they examined social conditions in the wake of World War I, with workers fighting powerful monopolies and trusts and an increasing concentration of wealth and power in the hands of the few. The Bishops of 1919 recommended a series of social reforms that prefigured the New Deal initiatives of the 1930s: a federal minimum wage, the right to organize in labor unions, social security for the elderly.

Bishop Dewane’s letter “On the Hundredth Year of the United States Bishops’ Program of Social Reconstruction” reminds us that the problems of monopoly, economic inequality and exploitation are still all too real today…

Today’s economy, if measured by the stock market, has the most money and wealth it has ever had, and unemployment is around the lowest it has been in fifty years…[yet]  more than one in five jobs in the United States is in a low-wage occupation where the median wage pays below the poverty threshold for a family of four.  Real wages have been largely stagnant for decades, and workers’ share of the fruits of the economy has been declining for decades. Why does this situation persist?

New research suggests that anticompetitive behavior from employers has resulted in lower wages in many labor markets, particularly for lower wage workers.  To be clear, Catholic social teaching holds wages to the standard of a just wage, which is not synonymous with a merely competitive labor market.  In theory, low unemployment should raise wages, but recent research suggests that this may be offset by the increasing concentration of employers—in other words, fewer numbers of employers are employing larger shares of the labor force, giving employers greater power to keep wages down.

As in 1891, with Rerum Novarum, or in the 1919 Program, Bishop Dewane highlights the importance of unions in addressing these issues.

The declining share of labor’s access to the wealth of the country cannot be explained by any one model or concept alone.  Nevertheless, that story must include the dramatic decline of worker unionization rates: now, only about 10.5% of workers belong to a union, including only 6.4% of the private sector.  A complex set of policies and decisions over decades have led to the present state of things.  A better arrangement will require careful and nuanced thinking in processes over time.  From the Church’s perspective, progress must include the expression of solidarity that unions strive to embody, as well as the respect for the priority of labor over capital, which is nothing less than the primacy of human beings over “things.”

We in the Catholic Labor Network certainly agree that a just economy must reverse “the declining share of labor’s access to the wealth of the country” and that “the dramatic decline of worker unionization rates” is a leading culprit in today’s income inequality. If we want to live in a good society, we need a large dose of the “solidarity that unions strive to embody.” Labor Day is the perfect time for we as Church to consider how we can support workers and foster that solidarity.