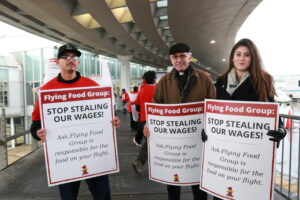 Some 20,000 workers across the United States toil in kitchens preparing food and beverages for the nation’s major airlines, but fewer than 5% can afford the family health care insurance offered by their employers. That’s one reason workers rallied and picketed at more than a dozen major airports on November 26, just before the Thanksgiving travel rush. They shouldn’t have to get two jobs to provide health insurance for their families.

In fact, too many of these workers – most of them immigrants – are living on poverty wages. These jobs generally pay wages at or just above the minimum. It’s not unusual to meet a worker in these occupations who works full time for less than $20,000 per year. That’s why they have joined unions like UNITE HERE and the Teamsters and have voted to strike. 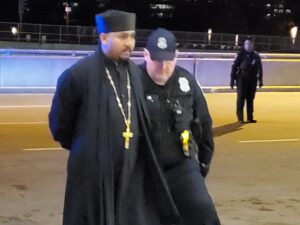 I joined about 100 workers and supporters picketing at Washington DC National Airport, where twelve airport workers and union activists – including one Ethiopian Orthodox priest, witnessing beside the many Ethiopian workers there – were arrested in a civil disobedience action. Fr. Gene Pocernich represented CLN at Chicago’s O’Hare airport. More actions coming soon at an airport near you!