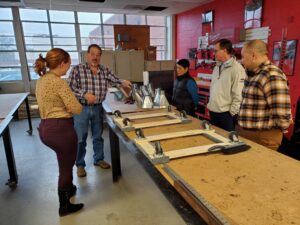 The construction sector was the original “gig economy” where every job was temporary, lasting the duration of a building project. But construction unions figured out more than a century ago how turn these temporary jobs into family-supporting careers. Unions and contractors agreed to pool resources to train and maintain a skilled workforce, dispatched on request from a hiring hall. It’s still a great path to the middle class, and that’s why a delegation from the Archdiocese of Washington’s Catholic Charities recently visited the Sheet Metal Workers’ training center for a tour.

Carlos Gutierrez, Bridget Maley, and Melida Chacon toured the facility, from the welding lab outfitted with Local Exhaust Ventilation to protect students from exposure to welding fumes to the AutoCAD (Computer Aided Design) computer lab. They also learned how the union recruits apprentices and provides health insurance coverage and pension benefits for those entering the trade.

Construction unions bargain agreements with an entire group of construction companies at a time who commit to use union labor, calling the hiring hall for additional workers when necessary. For each hour they employ a union construction worker they make a per capita contribution to a series of trust funds – one to run the training program, another to purchase health insurance for employees, and yet another into a pension fund for the workers’ retirement. Each trust fund is managed by a joint board of contractor and union representatives. With this system, every contractor has access to workers when needed, while workers can move from one employer to another with portable benefits.

Applicants take a written test and interview for available openings (each construction trade has its own calendar). The trust fund will be investing tens of thousands of dollars per apprentice to train them, so they want to be sure that incoming candidates are committed and have good prospects of completion. Those accepted will spend a few weeks per year in the classroom, while spending the bulk of their time on the job working under the supervision of experienced tradesmen and tradeswomen. Rather than accumulating student debt, the apprentices earn while they learn, paid on a scale that climbs toward the full rate as they accumulate experience.

The trades are interested in diversifying their ranks, actively seeking to recruit more women and people of color. They look forward to working with Catholic Charities to identify candidates for tomorrow’s construction workforce.