Labor unions are foundational institutions in modern Catholic Social Teaching on the economy and society, and in his 2009 letter Caritas in Veritate, Pope Benedict XVI told us that Catholic teaching regarding unions must be honored today “even more than in the past.” Yet in America today fewer than one in ten workers belongs to a labor union, and many Catholics are unfamiliar with what unions do and why. To address this, the Catholic Labor Network and Georgetown’s Kalmanovitz Initiative for Labor and the Working Poor invited two workers who belong to area unions to talk about their work life and their union activities. Afterward, John Carr from the university’s Initiative on Catholic Social Thought and Public Life offered commentary and perspective. 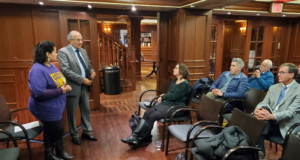 Jesus Salazar, a custodian employed by building services contractor EMI, addressed the university audience with help from an interpreter. An immigrant from Peru, Salazar recalled the recent round of bargaining between the union (Service Employees International Union Local 32BJ) and about 60 commercial cleaning contractors. As a union “brigade leader” Salazar visits his co-workers on other worksites to organize support actions and to communicate about contract negotiations. Through such member-to-member organizing the union has won substantial wage increases (Salazar earns more than $16 per hour) and protections against sexual harassment – important because women frequently work alone in buildings after hours. (CLICK HERE for video of Mr. Salazar’s remarks)

Tenae Stover works at LSG Sky Chefs, a contractor who prepares meals for American Airlines, Delta and other airlines. Although the airlines are highly profitable, this occupation is one of the lowest-paid in the air transportation industry – and the family health insurance offered by the employers is so costly that fewer than 5% of the workers elect to accept it, many going entirely unprotected. That’s why some 20,000 of these workers across the country have organized, mostly with UNITE HERE, the hotel and food service union. Stover serves on the union’s bargaining committee, and has participated in activities to alert airport passengers to the issue. (CLICK HERE for Ms. Stover’s remarks)

Carr stressed how extensively Catholic social teaching focuses on the dignity of the human person and in particular on the dignity of work, and how the two speakers had offered a lesson in what solidarity looks and sounds like. “I mostly think about [papal] encyclicals,” Carr observed. “What we just heard was a walking, talking encyclical. This is our tradition at work. This is the Gospel in action.” (CLICK HERE for Mr. Carr’s remarks)

The program concluded with a lively discussion, and was covered in CRUX and other Catholic media outlets.