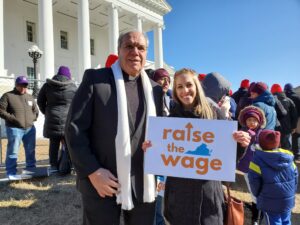 The 2020 effort has been a qualified success. Advocates called for a series of annual increases culminating in a $15/hour wage later in the decade, but opponents argued that while $15/hour might make sense in Virginia’s expensive Washington DC suburbs, it was too high for some other parts of the state where the cost of living was lower.

Either way, minimum wage workers are slated for an increase from the current $7.25 to $9.50 per hour in 2021. For a full-time minimum wage worker, that means their annual salary of just under $15,000 per year will jump to about $19,000 per year, a life-changing sum. That $4,000 could cover much of the cost for a child’s braces, or a year of payments on an economy car!

Still, $19,000 per year is barely above the poverty line for a small family, so we’ll be back next year to continue the fight for $15.