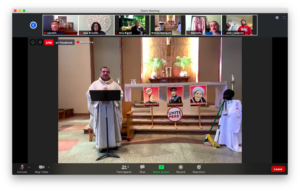 The workers of UNITE HERE Local 11 are hurting. More than ninety-five percent of the members of Local 11 – who work in Los Angeles hotels and restaurants – have lost work as the pandemic shuttered the city’s hospitality sector. So the largely Latino and immigrant workforce did what came naturally: they gathered virtually for a Mass.

The beautiful liturgy was celebrated by Fr. Mike Guitierrez, with members of Local 11 doing the readings and providing the music. Fr. Mike, from St. John the Baptist in Baldwin Park, has had a long relationship with the members of the Local. Twenty years earlier, when he was assigned to a Parish in Santa Monica, several of his parishioners approached him – they worked in area hotels and were trying to organize a union, and asked for his support. “Workers need the support of the Church, and priests involved in labor solidarity have a rich tradition in the United States,” he explained.

Ana Lara, a housekeeper at the Beverly Wiltshire and twenty-two year union steward, read the first reading. “It was so good because we had so many fears. It was time to ask God to help us. We feel more at peace.”

The Spanish-language Mass was livestreamed and a recording can be viewed HERE.