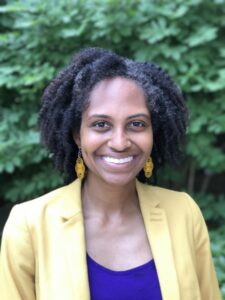 Adrienne Alexander, Director of Intergovernmental Affairs for the American Federation of State, County and Municipal Employees (AFSCME) in Illinois, serves as Vice President of the Catholic Labor Network. Adrienne’s union activism and Catholic faith share a thread in her family’s history as both are a source of pride and dignity for her family.

Her great-grandfather was a floor refinisher by trade but found work hard to find as a Black man in the segregated south. However, the local nuns gave him work, which led him to convert to Catholicism. His son — Adrienne’s paternal grandfather — became one of the first of many in the family to make a career in the US Postal Service and become a member of the American Postal Workers Union (APWU).

Like so many Black folks from the south, Adrienne’s maternal grandparents headed north looking for economic opportunities.  Adrienne’s grandfather got a job in Flint and joined the United Auto Workers (UAW) while her grandmother worked at a local hospital represented by the Service Employees union (SEIU). Being members of their respective unions, gave them dignity and financial resources they could not get in the south.

Adrienne’s parents live in Georgia where her father works for the Archdiocese of Atlanta newspaper as a photographer and her mother retired from work as a lobbyist. Because of her father’s job, growing up she had a unique exposure to the diversity of the church and got to know many priests and sisters. However, it was not until Adrienne attended a training at the Congressional Hunger Center and said out loud for the first time that her faith motivates her worldview, that she set about explicitly putting her faith into action through her work and began a career fighting for workers’ rights. In 2010, she joined AFSCME in Illinois and eventually became Director of Intergovernmental Affairs for AFSCME Council 31. AFSCME Council 31 was ground zero for attacks on the rights public employees because it was a Council 31 feepayer that filed the fateful Janus lawsuit.

Adrienne lives in Chicago with her husband and daughter. They attend St. Benedict the African in the Englewood neighborhood. She is a board member of Arise Chicago, a nonprofit organization that works at the intersection of faith & workers’ rights, and the Catholic Labor Network. Adrienne is a graduate of Agnes Scott College, a small, women’s college in Georgia, and earned her Master’s degree in Public Policy from the University of Minnesota.