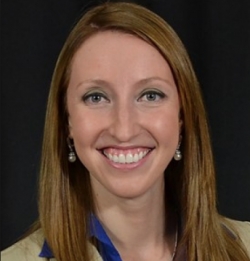 Catherine Orr has been working with marginalized communities for many years and has embodied the call of Catholic Social Teaching. While attending Marquette, she was doing a service learning project in which she worked at a group home for at-risk boys. She worked on anger management with the boys but was forbidden from mentioning anything related to religion, which she found difficult because forgiveness in foundational to all faith traditions. She wanted to continue to help the marginalized and the poor but wanted to make her faith a more explicit part of this work.  This led her to the Department of Living Justice in the Diocese of Green Bay where she became the diocesan director running the St. John the Evangelist Homeless Shelter, Inc. and the Micah Daytime Resource Center for people struggling with homelessness. During this time, she saw the struggles of immigrant workers in the local agricultural sector, which led her to become active in immigrant issues. She worked in coalition with farmers and community activists to fight for immigration reform.

Catherine and her family relocated to Youngstown, Ohio in August 2016, and while living there, she worked in the Social Action Office for Catholic Charities in the Diocese of Cleveland. During this time, she witnessed the mass layoffs at the Lordstown General Motors and saw the devastation on the community as economic security and dignity gave way to opioid abuse. While living in Youngstown, she became the Program Coordinator for the Roundtable Association of Catholic Diocesan Social Action Directors that operates out of a virtual office setting.  Her role is to support social action directors around the country in their ministerial efforts.

Two years later, Catherine and her family returned to southeastern Wisconsin, and she began ministering as the Pastoral Associate at Lumen Christi Parish in Mequon, a position she also continues to hold today. In all of her work, she sees dignified work as a fundamental aspect to Catholic Social Teaching, which continues to inspire and drive her ministry.