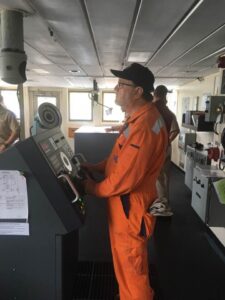 Fr. Sinclair Oubre on duty in the Panama Canal

In November of 2001, I took a job as the 12-4 AB on the MV Seabulk Challenge. I flew to Boston, and on arrival at the facility gate where the ship was discharging heating oil, I experienced the enhanced security procedures that were put in place after the attacks of September 11.

We sailed to Camden, New Jersey, loaded high-sulfur diesel at the Citgo facility, and then sailed into the Gulf of Mexico. We eventually docked at Kinder-Morgan in Houston, and began discharging our cargo.

On our arrival, the facility informed us that we were detained onboard because of “security.” A US-flagged ship crewed by US merchant mariners must have posed an extremely high security risk to the facility. Many of the crewmembers lived in Houston, and were prevented from seeing their wives and children in the 8 hours they had between watches.

The strange thing was that we watched tank trucks drive by the ship to go to the heart of the facility, load, and the depart.

As one crewmate stated in exasperation, “They want our oil, but they don’t want us.”

Jump forward almost 19 years, and the ability of US and foreign seafarers to access shore leave has finally been enshrined in US regulations.

The legislation was originally passed in the 2010 Coast Guard Authorization Act. Section 811 was simple:

“Each facility security plan approved under section 70103 ( c) of title 46, United States Code, shall provide a system for seamen assigned to a vessel at that facility, pilots, and representatives of seamen’s welfare and labor organizations to board and depart the vessel through the facility in a timely manner at no cost to the individual.”

This seems pretty straightforward, but billion-dollar companies could not figure out what the words “timely” and “no cost” meant. So began a ten-year regulatory process that finally guaranteed merchant mariners the right to shore leave when they arrive at US ports, assuming they have D-1 visas, and that no federal agency has restricted shore leave.

On June 1, 2020, the US Coast Guard regulations implementing section 811 finally came into force. Presently, foreign seafarers are restricted to their ships by company policies (concern that the seafarers will bring COVID-19 back to the ship), and CDC and CBP policies that restrict them to their ships during the pandemic. Once the pandemic ends, these restrictions will be lifted.

For members of the members of the Sailors Union of the Pacific, the Seafarers International Union, the Marine Fireman’s Union, the Master, Mates & Pilots, the Marine Engineers Beneficiary Association, the American Maritime Officers, the Inland Boatman’s Union, and the thousands of non-union US merchant mariners, facilities will have to manage their visiting seafarers as well as they manage the ship’s cargo.