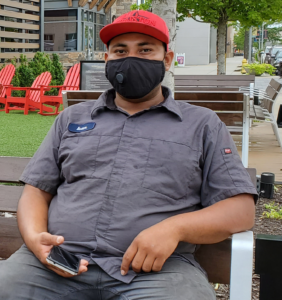 “I was paid $12 per hour,” said Ivan (right), a sheet metal worker who helped install air conditioning ductwork at Eckington Place, a high-end mixed-use development under construction in Northeast DC. The legal minimum wage in Washington DC was $14/hour when Ivan started the job in February 2020, and it’s $15/hour now. “Jimmy [the recruiter] told me that if I learned fast I would get a raise, but I never did.”

Catholic Labor Network field organizer Ernesto Galeas has visited CBG construction sites across the city, finding that Ivan’s situation is hardly unusual. Subcontractors on these jobs routinely paid employees as if they were independent contractors to evade detection when violating minimum wage or overtime laws. Galeas assisted the workers in gathering evidence and filing a class action lawsuit against CBG on behalf of all employees of CBG subcontractors.

“I asked my boss why I was being paid less than the DC minimum wage,” said Carmen, a drywall finisher working for a different subcontractor at the Eckington Place job. “He told me that he didn’t owe me an explanation and that if I didn’t like the wage I could leave.”

Carmen said she often worked overtime, but was never paid time and a half as required by law.

Galeas says that wage theft, especially targeting immigrant workers, is rampant in the Washington DC construction industry. Even visiting the largest construction sites in the city, he finds that half the employees are paid as if they were independent contractors, allowing the employer to evade both overtime pay and required taxes such as social security and unemployment insurance. Contractors who do this also avoid paying for workers’ compensation insurance – leaving workers on their own if they get injured.

“This is happening all over the city,” says Galeas. “The contractors exploit them and think they will be afraid to speak up because they are immigrants and some are undocumented.”