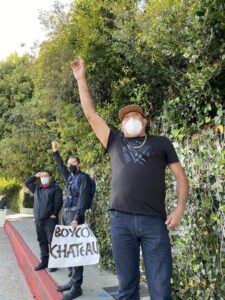 Across the country hotel and restaurant workers are fighting for “Right to Recall” – that is, calling on employers to rehire their furloughed employees as they reopen. But too many hotels are looking at the pandemic as an opportunity to shed older career employees and replace them with younger and cheaper hands. That’s why the Catholic Labor Network has supported efforts by the hotel workers’ union UNITE HERE to pass local and state ordinances requiring the reopening hotels and sports arenas to offer employment to their furloughed employees.

Even with passage of such laws, though, some firms resist doing the right thing for the career employees who helped build their businesses. Recently workers at Chateau Marmont in Hollywood protested the hotel’s stubborn refusal to restore their jobs. UNITE HERE activist and CLN Board Member Hannah Petersen described the scene:

As dozens of honking cars with “Boycott the Chateau” painted on their windows moved past, I looked back at the emboldened faces of the Chateau Marmont worker committee.  These room attendants, bell persons, valet, servers, and cooks who were fired by Hollywood’s most famous hotel exactly a year ago led the fight for the nation’s first right to return to work law.  The law will require all Los Angeles hotels and event centers to recall by seniority their workers who lost their jobs because of the pandemic.  Community and religious leaders including Fr. Justin Claravall, SJ from Dolores Mission Church joined the workers in their call for a boycott of the Chateau Marmont until it has demonstrated a commitment to respecting its workers’ years of service by rehiring them in accordance with their legal rights and to ensuring that all workers feel treated with dignity and respect.

To support the workers, you can sign this pledge not to patronize the hotel until the workers are made whole: https://www.unitehere11.org/chateau-pledge

Bitter Strike Continues at For-Profit Catholic Hospital Catholic Church in NH: Vote no on “Right to Work”
Scroll to top