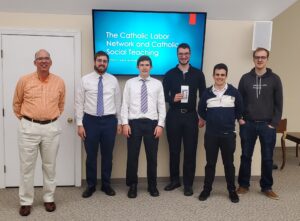 This March, the Catholic Labor Network was invited to present on Catholic Social Teaching to the Social Justice Committee at the CUA Theological College. CLN Executive Director Clayton Sinyai reviewed the history of Catholic Social Teaching on labor and work, the historic impact of Catholic thought on American public policy, and the ABC’s of labor unions with the seminarians (pictured, with Fr. Martin Burnham).

The seminarians were intrigued to learn the role that Monsignor John Ryan played in the movement for minimum wage laws in the United States. Pope Leo XIII’s encyclical letter Rerum Novarum argued that every worker was entitled to a living wage, and that if the labor market failed to provide for this, society should intervene. Msgr. Ryan, the bishops’ first Social Action Director, popularized the principles in Rerum Novarum by promoting public policies consistent with them. These included minimum wage laws (first at the state and later at the federal level) and laws protecting the right of workers to organize (the Wagner Act of 1935).

The College draws seminarians from across the country, and the seminarians had a rich discussion, combining what they learned in their theology classes with the economic and historical data in the presentation. Seminarian Michael Marincel later observed,

To integrate what I have learned about Thomistic Natural Law with what you discussed with us in your talk, because all the material goods of the world (things) are ultimately intended to meet the needs of people, if some people’s needs are not being met, and other people have far more than they need, we need to find ways to assure that the material goods of the world (things) get to those who are in legitimate need. It seems that unionization is one of the best ways to do this, because it allows more equal wages to come out of a conversation between employers and employees that is conducive to management and labor learning to relate to one another as real people with legitimate needs rather than just another cog in the system.

The talk helped me be aware of how Catholic Social Teaching on labor and work applies to people who work in a parish: that they need a healthy salary and enough time to be with their families and for rest. Also, I will probably be more aware of the services I use as a future pastor, making sure they are from companies that treat their employees and the environment according to Catholic Social Teaching principles.

The Catholic Labor Network was pleased to engage these future priests and looks forward to similar discussions at other seminaries.