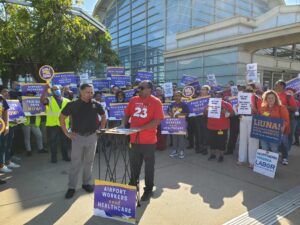 Most of the workers that keep an airport running – from cabin cleaners, to wheelchair attendants, to food service workers – are employed by contractors, not the airport itself. In the absence of clear and fair labor standards in contract solicitations, vendors slash worker wages and benefits to the bone to submit the lowest bid.

At National and Dulles Airports, UNITE HERE represents most food service workers while the Service Employees International Union (SEIU) represents cabin cleaners, security guards, wheelchair attendants and other support personnel. Most of these contractors fail to provide paid sick days or offer affordable family health care coverage to their employees. The two unions came together to organize the rally, held during an MWAA board meeting.

The Catholic Labor Network has heard testimony from SEIU Local 32BJ members concerning the lack of paid sick days, and is supporting the workers’ demands from the MWAA board.