The Catholic Labor Network is a place for Catholics — lay, religious and clergy — who find inspiration in Catholic Social Teaching on labor and work.

On this site we come together to exchange information about the Church and social justice and to support working people in their struggles. We promote the cause of workers and Catholic social teaching in our labor unions, parishes and other organizations. 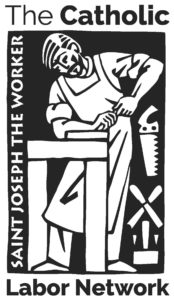 I just went from paying $120 per week on health insurance to $7 per week—and there’s no deductible. It is such an incredible feeling to know that it was me and my coworkers that won this. It feels so great to know that this whole fight was worth it in the end.

The Catholic Labor Network has been accompanying the Senate Cafeteria workers on their march toward justice for more than a year. END_OF_DOCUMENT_TOKEN_TO_BE_REPLACED