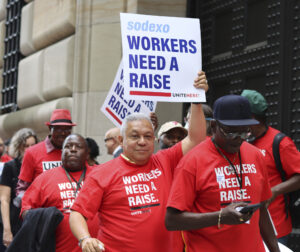 Sodexo food service workers from government agencies across Washington DC rallied Tuesday at the Capitol, following a similar action last week in New York City at the Federal Reserve. Represented by the hotel and food service union UNITE HERE, the workers, hard hit by inflation, are calling for a living wage in upcoming contracts.

The French multinational operates institutional cafeterias across the country at corporate offices, colleges and universities (including many Catholic ones), and in government buildings, the focus of the recent actions. Sodexo is the largest federal food service contractor.

For more than a decade, UNITE HERE has been organizing to transform the institutional food service sector from a poverty-wage industry into one featuring living wage jobs, affordable health care, and retirement benefits. While the union has reported success in much of the sector, Sodexo has remained an obstacle, stridently resisting organizing efforts and favoring a low-wage business model. According to the union, some Sodexo workers based in Washington DC are paid the DC minimum wage of $16.10/hour – that is, about $32,000 per year for a full-time worker, well below the cost of living in the expensive capital region.

According to Catholic Social Teaching, every worker is entitled to a living wage. This principle was first elaborated in Pope Leo XIII’s Encyclical Rerum Novarum [45]. In Laborem Exercens, St. Pope John Paul II explained further that a just wage should be sufficient to support a worker’s family [19].

“Last year in September, I had to move out of a house I’d been in for 14 years because I couldn’t afford to keep up with rent,” said Venorica Tucker, a banquet server/bartender at the House of Representatives. “I live with my son, so we chip in and try to make it. It’s difficult, even with their help.”

On September 28 the Catholic Labor Network will be hosting a listening session with Sodexo workers. Interested? CLICK TO REGISTER