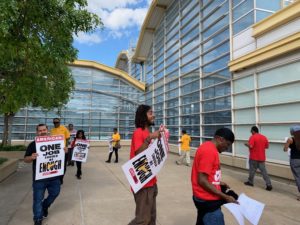 After a strike vote, food service workers at National Airport in Washington DC warn passengers about the developing labor dispute.

The workers who prepare food for flights are among the poorest paid in the airline industry. In many areas they earn little more than the minimum wage, and they can seldom afford the high premiums to participate in their employer’s health insurance plans. That’s why thousands of them have organized and joined UNITE HERE, the hotel and restaurant workers’ union. The catering firms that employ them, however, have refused to budge. So one by one, workers in airport kitchens across the country have taken strike votes. Will there be a nationwide strike in the fall?

That depends on the airlines. Although most of the airlines outsourced these jobs long ago, they still hold the key to a living wage for these food service workers. One job should be enough to support a worker and his or her family, and the highly profitable airlines can afford to make this happen. The Catholic Labor Network will keep you posted as this story develops.