The United Farm Workers are on the march! In California members of the UFW set out from Delano on foot in the Summer heat August 3. They will arrive in Sacramento on August 26.

What do they want? The right to vote by mail in union elections. 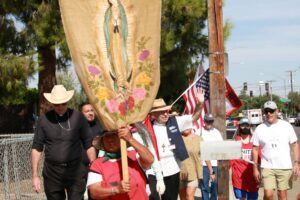 A history lesson: in 1935, the U.S. Government passed the National Labor Relations Act, setting up the election process that allows workers to choose a union representative. But the Act excluded farm workers from its protections.

In 1975, under pressure by Cesar Chavez and the United Farm Workers union, California passed an Agricultural Labor Relations Act to give farm workers the right to vote in union elections. The ALRA was an important step forward for the state’s farm workers, but it needs improvement.

Under current law, farmworkers in the Golden State who want to form a union must vote on the property of their employer, which opens opportunities for intimidation. UFW members are calling on Governor Gavin Newsom to sign AB 2183, a bill that would allow workers to vote for a union by mail if they prefer.

The California Catholic Conference has come out strongly in support of the policy change, and the Church has mobilized to welcome the marchers along the route. When the marchers passed through Fresno, for instance, they were joined by Bishop Joseph Brennan (pictured).

The farm workers are receiving similar solidarity from the state’s labor movement. Also present in Fresno was a sizeable contingent of union members from the Los Angeles hotel workers’ union, UNITE HERE Local 11. (See Report from the UFW March by Mary Entoma.)

The Catholic Labor Network has urged Governor Newsom to sign AB 2183 and is working with its California members and contacts to get additional messages to the governor. If you would like to send the Governor a message in support of farm workers, CLICK HERE.

Report from the UFW March Report: More than 600 Catholic Institutions with Labor Unions
Scroll to top