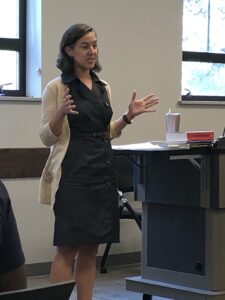 When I began my role as a liaison for the Catholic Labor Network in Nashville, I did not know about the newly-formed Wendland-Cook Program in Religion and Justice at Vanderbilt.  After meeting a Divinity School student at a Gamaliel-affiliated community task force on economic inequality, I got connected to Dr. Joerg Rieger, founding director of the Wendland-Cook program.  He invited me to address his course, “Theology, Economics, and Labor,” whose syllabus reads:

The class is designed to help students understand the challenges of broad economic developments and of work and labor for the lives of individuals and communities. Changes in economics and labor affect not only the worlds of politics and economics but also the world of religion and faith, as growing disparities shape us deeply, all the way to the core. The goal of this course is not to bemoan the situation but to search for alternatives and to show that all those affected by these problems can also contribute to turning things around, based on the notion of deep solidarity.

I presented on the day when they were considering “Christian Responses to Capitalism,” particularly written responses from various denominations, including the American Baptist, Episcopal, Lutheran, Methodist, Reformed, Unitarian, United Church of Christ, and–most notably–Catholic traditions.  The class included twenty-four graduate students from various theological backgrounds, including a few Catholics.  I spoke on the rich Catholic tradition supporting labor (including Scripture and Catholic Social Teaching–particularly the social encyclicals and pastoral letters on labor).

In addition to expounding on the historical/social encyclical context, I also talked about the current-day work being done on behalf of the Catholic Church through the Catholic Worker Movement, the Catholic Campaign for Human Development and the Catholic Labor Network to support on-the-ground initiatives for workers’ rights.  I shared how CLN is working in Nashville to support the MC3 Apprentice Readiness Program in the Building Trades, to build clergy  support of Workers’ Rights Campaigns, and eventually to create educational opportunities on labor for leaders in the Catholic Community, including the Dignity of Work and the Rights of Workers.

The graduate students were encouraged to learn that the Catholic Church has an action plan in place to practice what they have preached and written about since the dawn of Catholic Social Teaching with Rerum Novarum in 1891.  The students’ response should be a source of encouragement for all Catholics to embrace our rich tradition and welcome it as a call to action to support the dignity and decency of work in our own local communities.

Aimee Shelide Mayer is a local representative of the D.C.-based Catholic Labor Network and works to support opportunities in Nashville, TN, that promote the principle of Catholic Social Teaching on the Dignity and Rights of Workers. She can be reached at aimee@catholiclabor.org or 615.669.4694