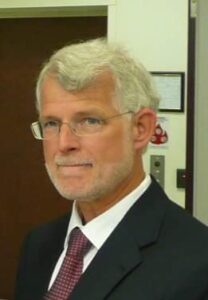 Phil Tabbita is the President of the Catholic Labor Network. In his day job, he is Manager of Negotiation Support and Special Projects for the American Postal Workers Union (APWU).

Phil Tabbita did not begin his working career with the intention of becoming a union activist. He just needed a job while he studied music at Wayne State and the Postal Service was a good job to have. Before going to Wayne State, Phil attended the seminary, but left feeling bitter towards the church. He grew up believing priests were saintly, but in seminary he encountered regular fallible men. He stopped attending church and believed he could structure his faith independently and have his own prayerful relationship with God.

Phil began working for the US Postal Service in 1970 as a window distribution clerk and was active in the organization of the APWU as a number of Postal Service unions merged.  He joined the national APWU staff in 1983 and has been involved in every round of contract negotiations since 1981. Ten years after he had left the church, he was the lead for the union side of an arbitration and a witness offered to lie to help the union’s case. Phil was shocked at the cavalier attitude towards an amoral act like lying under oath. This event caused Phil to reflect on his faith and he realized he no longer had a relationship with God. He returned to the church to become an active member of the Catholic community and developed a deep connection to the Eucharist because of his closeness to God through the sacrament.

Phil tries to spread Catholic Social Teaching through his labor work and believes it is the best kept secret about the church. He believes work is ubiquitous and touches everyone, therefore we should work to make jobs decent and dignified. The Church is the antidote to the world and gives us the ability to look around and see good people. Work also gives us the ability to carry out our obligation to make the earth better.

Phil’s role at the APWU is to serve as executive assistant to the president, support collective bargaining, and act as a union advocate in arbitration among other jobs. Phil is active in the Knights of Columbus and is an usher at the Basilica of the Shrine of the Immaculate Conception.

The Pandemic, the Economic Freeze, and the American Worker Will Eulen use pandemic as a union prevention tool at Washington National A...
Scroll to top