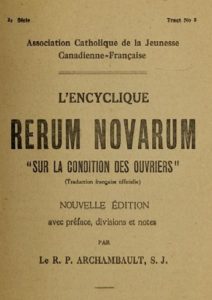 May 15, 2016 marked the 125th Anniversary of Rerum Novarum, widely considered the foundation of modern Catholic social teaching. In this 1891 Encyclical, Pope Leo XIII examined the industrial revolution in light of Christian teaching on justice. Finding that the traditional economy of small property owners (farmers and artisans) was giving way to an economy dominated by a few property owners and a large working class, the Holy Father criticized the laissez-faire economy and gave a strong endorsement to trade unions. But where contemporary socialists anticipated ever-increasing class struggle, Leo believed that labor unions could play a positive role END_OF_DOCUMENT_TOKEN_TO_BE_REPLACED 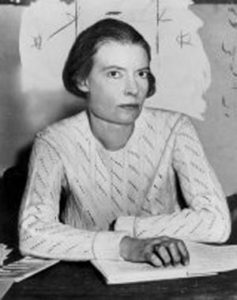 So far 2016 has been a good year for the legions of social justice activists inspired by Dorothy Day, founder of the Catholic Worker movement. In April came news that the cause of Day’s canonization had taken an important step forward as Cardinal Dolan of New York had begun to review evidence from her life and actions to determine if she lived a life of “heroic virtue” and merits recommendation to the Congregation for the Causes of Saints in Rome.

The year has also seen Patrick Jordan, a former editor of the Catholic Worker newspaper – and later, of Commonweal magazine – pen a new life of Dorothy Day. David Cloutier of Mount St. Mary’s University reviews Dorothy Day: Love in Action in the June issue of Commonweal…

Jordan, whose voice remains admirably muted throughout, concludes by suggesting that Day be seen as an “American prophet”—with prophecy understood not only as offering an urgent message but also as embodying a whole “way of being in the world.” Day’s prophetic message, Jordan writes, sought “a closing of the gap between private and public morality…and questioned both our materialism and militarism.” She was, he concludes, “someone who kept pushing us.”

Once upon a time a landowner hired some day laborers for his vineyard. Going about his daily business the landowner thrice saw idle day laborers in the plaza parking lot. Each time he hired them for the vineyard job. That evening he paid all the workers the standard daily wage; the same total wage for those who worked a couple hours as for those who toiled all day. (See Matthew 20: 1-16)

In 2005 Hamdi Ulukaya founded Chobani Yogurt in Norwich, NY. He hired five workers. Chobani is now the top-selling yogurt brand with over 2,000 employees at its New York and Idaho plants. Ulukaya, a Kurdish immigrant, is quite wealthy. Late last month Ulukaya told his employees about a gift. He is giving each of them shares in the company, totaling about 10% of the company’s worth. The initial math estimates the gift on average to be $150,000. Some workers will get more and the final calculation may well increase the average. “I cannot think of Chobani being built without all these people,” Ulukaya told the N.Y. Times (4/26/16). Ulukaya has long said that a company’s moral conduct, including better pay, leads to success. Companies, he told another interviewer, must look beyond the so-called bottom line. “Business is still the strongest, most effective way to change the world,” Ulukaya said.

Matthew does not tell us the precise motivation of the vineyard owner. Ulukaya, like all of us, does everything for multiple motives. The two employers though share a world view. They have a similar conviction about the nature of reality. And this is important: their business disposition comes irrespective of life’s ups and downs. The vineyard owner and the yogurt executive both suspect that inexplicable generosity haunts the world. They believe that the proper response to the gift of life and to all of life’s gifts is to give the gift away.
Neither executive denies suffering. Misery is part of the human condition. Specifically, Ulukaya has experienced business and personal failures. The same was probably true for Matthew’s agricultural executive.
Neither executive thinks that a gratitude attitude means acquiesce to injustice. Nor is there evidence that either thinks business is for saps. They are realists whose take on things includes appreciation for the powerful but unpredictable spirit of benevolence.

A world centered on meritocracy is always filled with cynicism and resentment. Those who live only by the art of the deal are always incomplete people who usually cannot sustain their ventures.
Belief in a grace-filled world will not result in constant, pervasive toe-tapping, hand-clapping happy times. It does, however, instill confidence. It disposes people to abiding joy that percolates all around. Vaclav Havel (1936-2011), a president of Czechoslovakia and first president of Czech Republic, reminds us that haughtiness is deceiving. Real hope, he says, is not the conviction that something will turn out well, but the certainty that something makes sense, regardless of how it turns out.” 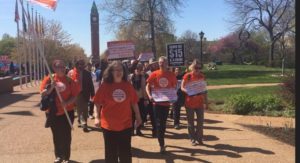 This spring, once again, adjunct faculty are on the move at Catholic Colleges around the United States! On April 14, as fast-food workers across the nation demonstrated for living wages as part of the “fight for $15,” several Catholic campuses witnessed events drawing attention to the poverty wages earned by too many non-tenured college instructors. In New York, Fordham Faculty United sponsored an event on “Labor Justice at Jesuit Institutions.” At Seattle University – a Jesuit institution that refuses to recognize its adjuncts’ right to organize – instructors and students held a march and a “fast for justice.”

On the brighter side, instructors at St. Louis University filed for a union election. The adjuncts are voting now on whether to join SEIU Local 1; ballots are scheduled to be counted May 23. 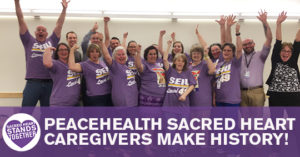 Nearly 1100 CNAs, housekeepers and others employed at two Catholic hospitals in Oregon ratified their first contract in late April, a contract that included an 8% across-the-board raise. Labor and management had fostered a climate of mutual respect in the period since the 2015 union vote. PeaceHealth VP Debra Miller said told the local Register-Guard newspaper that she was “pleased with the outcome and the collaborative spirit the bargaining teams brought to the process.” she said. SEIU Local 49 President Meg Niemi said, “our members and management took the process very seriously. Our members felt this was urgent, so we were able to get to a first agreement quicker than usual.” 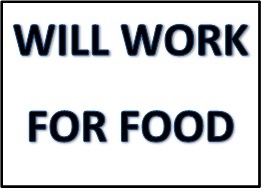 st people don’t realize it, but in many states some or all nonprofit organizations can opt out of paying state unemployment insurance – and many do. Unemployment is an insurance fund against job loss, not a welfare program — so if no one is paying your premium, you’re out of luck. A Catholic schoolteacher in St Louis found this out the hard way when he turned up at the unemployment office after a layoff, and was turned away. Tony Messenger in the St. Louis Post-Dispatch describes what happened, and cites a survey that found nearly half the Dioceses had opted out in order to save money, leaving employees unprotected in the case of job loss. What’s the practice in your Diocese or Parish?

You probably know that May 1 is celebrated in many nations as Labor Day. Did you also know that the Church marks this day as the Feast of St. Joseph the Worker? As Pope Francis observed on May 1, 2013, in his general audience…

Jesus is born and lives in a family, in the Holy Family, learning the carpenter’s craft from St Joseph in his workshop in Nazareth, sharing with him the commitment, effort, satisfaction and also the difficulties of every day. This reminds us of the dignity and importance of work….Work is fundamental to the dignity of a person. Work, to use a metaphor, “anoints” us with dignity, fills us with dignity, makes us similar to God, who has worked and still works… 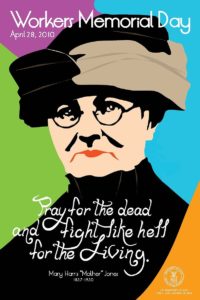 Around the world, April 28 is recognized as Workers’ Memorial Day – the day we remember the men and women who have lost their lives at work. You might think that this is a problem confined to tenement garment workers in Bangladesh or coal miners in China — surely with America’s wealth and technology this is not an issue for us? In fact, the Bureau of Labor Statistics counted 4,821 workplace fatalities in 2014. While the Dickensian conditions afflicting workers in the global South take an even greater toll, occupational fatalities are a worldwide problem. For a good summary of the US situation, check out the AFL-CIO’s Death on the Job report. And heed the advice of legendary Catholic labor agitator Mother Jones: “Pray for the dead… and fight like hell for the living!”

The late 1800s and early 1900s were boom years for U.S. Catholicism. Immigrants from Ireland, Germany, Eastern Europe and elsewhere populated urban neighborhoods, building churches and schools. Using Chicago as an example, its Archbishop James Quigley (1854-1915) issued a 1910 decree for the construction of more churches so that no one would need to go more than one mile to worship. “A parish,” he wrote, “should be such a size that the pastor can personally know every man, woman, and child in it.”
In that very year, there was already a square-mile neighborhood in Quigley’s diocese with 11 parishes: four for Irish-Americans, two for German, two for Polish and three for other Eastern Europeans. Over 70% of this Bridgeport neighborhood was Roman Catholic in 1910. Several other Chicago neighborhoods easily surpassed Quigley’s goal of one per square mile.

With some changes in the lineup, Bridgeport maintained 11 parishes into the 1980s. In the 1990s the number was reduced to seven. Today, using the same boundaries, Bridgeport has six Catholic churches. The same downsizing happened in most East Coast and Great Lakes areas. Detroit, for example, lost 30 parishes in 1989. END_OF_DOCUMENT_TOKEN_TO_BE_REPLACED

The term intrinsic evil is appropriate in a philosophy or theology classroom where students are presumably acquainted with some Aristotelian distinctions. Used in a presidential campaign, the term asks too much of electoral politics. Our U.S. Catholic bishops employ the term intrinsic evil a dozen times in their 2016 election guide, Forming Consciences for Faithful Citizenship. The term’s use there is, in the opinion of “The Working Catholic,” one more example of moralizing; one more ingredient in the disenchantment and frustration of our citizenry.

Politics is a “messy, limited [and] muddled activity,” writes Bernard Crick (1929-2008) in Defense of Politics (University of Chicago Press, 1962). Yet it is the most beautiful way of balancing public interests, lifestyle choices, conflicting rights, interwoven responsibilities and changing times. Politics (with its laws or policies) is always imperfect because politics is an exercise in this-worldly approximate justice. Its results at sunset must be renewed through the exercise of public virtues tomorrow morning. END_OF_DOCUMENT_TOKEN_TO_BE_REPLACED