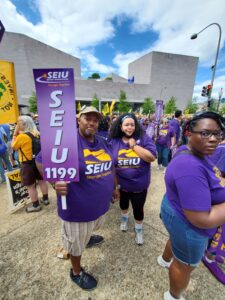 Have you heard of the Poor People’s Campaign? Back in 1968, Martin Luther King had a vision of poor people organizing across racial lines to transform American society. Fifty years later, that vision was picked up by leaders such as Rev. William Barber of North Carolina, who aspire to mobilize 140 million poor people and low-income workers around an agenda anchored in economic justice. As part of the campaign, on Saturday June 20 thousands rallied near the U.S. Capital to call for a “third reconstruction.” Labor and faith organizations were strongly represented in the effort.

Most of the speakers at the six-hour rally were grassroots leaders and activists, low-income workers and poor people testifying to their personal stories. These ranged from residents of Louisiana’s “cancer alley,” where industrial emissions of toxic waste threaten public health, to workers employed at Kentucky Fried Chicken and Starbucks who were fighting for a union and a living wage.

Among unions, the SEIU had a high profile, with busloads of members traveling from New York, Ohio and Florida to participate in the rally. “We’re here for the workers, for us – for a living wage,” explained SEIU 199 member Tommy Smith (pictured). “We aren’t getting what we deserve. The fat cats are.” Members of the IAM, UNITE HERE, and other unions were also in evidence.

Several Catholic organizations began the day with a short prayer service organized by the Franciscan Action Network in front of St. Patrick’s Church in downtown DC. These included Pax Christi and a large delegation of sisters from the Loretto community, among others. After the prayer service, the groups walked out in formation to join the March.

Other Catholic activists were already at the rally site, including Fr. Ty Hullinger of the Maryland Catholic Labor Network, who took a bus with the United Workers Association of Baltimore. “It is important for us as Catholics to show up and be part of these movements,” Hullinger explained.

In addition to grassroots activists, the rally also heard from a few labor leaders, including SEIU President Mary Kay Henry and AFL-CIO Secretary-Treasurer Fred Redmond. “Poverty is a failure of the system, not poor people,” Redmond observed.