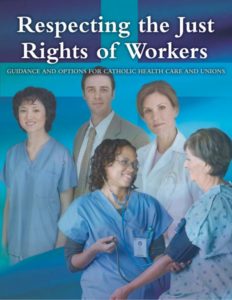 Today, June 22, marks the tenth anniversary of a remarkable document. Respecting the Just Rights of Workers: Guidance and Options for Health Care Workers and Unions was released on June 22, 2009, signed by a roster of 10 Bishops, union leaders, and Catholic hospital administrators.

Throughout US history, nuns belonging to a variety of religious orders had made care for the sick a focus of their work in the world, and their institutions came to account for some 15% of the nation’s hospital beds. The sisters became a model of Catholic and Christian charity known especially for their care for the poor – unlike many competitors, their nonprofit institutions could focus on the needs of patients rather than the demands of shareholders.

The last years of the twentieth century witnessed an explosion of organizing in the nation’s hospitals and nursing homes. Had nuns still been staffing the Catholic hospitals this movement would surely have had little effect: the sisters, who took vows of poverty, chastity and obedience, did not pursue personal wealth, had no families to support, and a vow of obedience that made strikes unlikely. But by the 1980s and 1990s, the dwindling number of sisters in these communities dictated that most employees were laypeople, who had taken no such vows and were supporting spouses and children.

I suspect that this experience gap between the sisters who still dominated the hospital corporate boards and the new lay workforce — many of whom were not Catholic in any event – explained much of the bitterness that accompanying some of the organizing campaigns. (Adam Reich’s 2013 study examining one of these organizing campaigns, With God on Our Side: The Struggle for Workers’ Rights in a Catholic Hospital, is illuminating on this issue.)

Catholic Social Teaching on the right to organize offered a framework for the two sides to begin a dialogue in 1997, hosted by the USCCB. In 1999 the group issued a Working Paper describing their shared principles, “A Fair and Just Workplace: Principles and Practices for Catholic Health Care.” But it would be another decade before the discussants issued the final product, Respecting the Just Rights of Workers. The guidance document urged that management and labor debate the issue of collective bargaining in a spirit of charity, each assuming the goodwill of the other party – and stressed that under Catholic Social Teaching the right to organize or not to organize in a union belongs to the workers alone.

The document has not put an end to bitter union organizing fights in Catholic hospitals – to work, both hospital administrators and unions must agree to honor its principles. Today, most Catholic hospitals in the Northeast and on the West Coast are organized, but the situation in the Midwest is mixed, and few Catholic hospitals in the South engage in collective bargaining with unions representing their employees. As workers in nonunion hospitals continue to seek union organization, and hospital management must decide how to respond, Respecting the Just Rights of Workers offers an important resource for both parties to consider.